Here we review the best 4000-watt generators to help you select the right one for you.

A 4000-watt portable generator can be used pretty much anywhere – from a farmhouse to powering your RV’s AC. In our reviews, we’ve included models that offer a really good value for the money.

Let’s check them out. 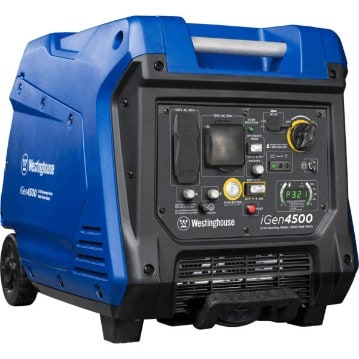 How to Choose the Best 4000-watt Portable Generators

To make sure you made the best purchase, here are some useful tips to keep in mind when looking for a 4000-watt generator.

Firstly, set a budget and identify a couple of 4k watt portable generators that fall within that category.

Next, consider the power performance of the generators with regard to starting and running watts. The starting wattage is an important value that determines whether or not the generator will start your motor-operated equipment and tool. Running power, on the other hand, determines the amount of load that it can sustain at a go.

You also want to think of generators’ runtime – how long the generator can run before the next refill.

Make sure to check the generators’ features as well.

The Westinghouse iGen4500 is a bit pricier than Champion 46596 and DuroStar DS4000S but that’s because it is in a league of its own.

Engineered with the most coveted inverter technology, this generator has a 224cc OHV 6HP engine that outputs an impressive 3700w of running power and a peak power output of 4500w.

Basically, this power will allow you to run most of your household appliances; ACs, sump pump, microwave, refrigerator, and TV and still leave some power to spare.

This generator delivers power with a THD of <3%- a good deal if you’ll be running delicate power-sensitive appliances such as medical gadgets with it.

But perhaps what will win you over is its power management system that lets you sync power output with the load. Consequently, the generator runs at a lower rev thereby saving you a lot of money on fuel. Precisely, this generator has a runtime of 16 hours on 25% load and 8 hours at 50% load from its 3.4-gal tank capacity.

The iGen4500 is considerably quiet too at 52 dB and this is what makes it one of the best 4000-watt inverter generators for camping and tailgating. Much better, it comes fitted with the TT-30 30A outlet for RV use. Other outlets are a 120V household outlet and 2 USB outlets. 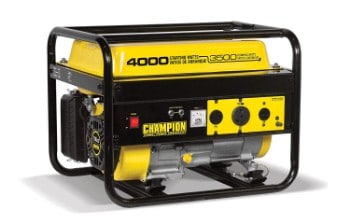 This is a good deal of power performance whether you want to use the generator to keep a number of home appliances powered during a hurricane, or plan to run some tools at a construction site.

One thing that you’ll realize is that the Champion 3500-watt 46596 is very popular with RV’ers. Besides being able to run the 15,000 BTU RV air conditioner, another reason for this popularity is its 30A outlet that most RVs require. Other outlets are a 120-volt 20A household receptacle and a 120v 30A locking outlet.

This generator will also be able to handle most of your camping power needs without a hassle. And a good thing here is that its 68-dB is more or less a humming sound that won’t disturb other campers.

The Champion 46596 is fitted with a 3.8-gallon tank and a 196cc OHV engine that promises up to 12 hours of constant power output at 50%. This is an incredible power performance considering that this generator does not have an Eco mode.

This generator also has Champion’s Intelligauge to keep you posted on stats such as Hertz, volts, and running time. It is also equipped with a low oil shutoff and Volt Guard to protect your appliances from surges.

Worth mentioning, the Champion weighs around 99 pounds and does not have a wheel kit. So, I’d advise you to get one. 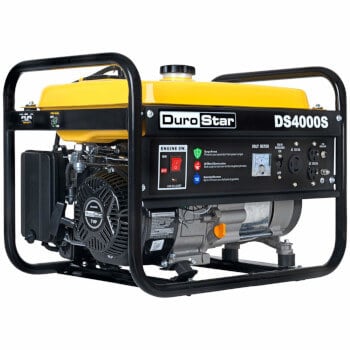 Durostar is synonymous with cheap and reliable generators, and their DS4000S is among the most affordable 4000-watt generators that we’ve come across so far. It also tops the rankings in our DuroStar generators reviews.

This generator has a running power 3300 watts and a surge power of 4000w. Despite its lower rated power output compared to the Champion above, it still packs enough power for different scenarios including household backup, camping, and construction sites.

A major benefit that you are going to appreciate here is its wheel kit and foldable handle. These 2 make this 105-pound generator portable besides making it even much cheaper than the Champion.

The DS4000S also an impressive set of mufflers that minimize its noise level to a mere 69 dB- an impressive performance for a non-inverter generator.

Starting is by a recoil starter and it has low-oil shutoff technology to protect your investment. The control panel isn’t complicated and features a voltmeter, a main breaker, two 120-volt household outlets, and one 120v 30A Twist-Lock receptacle. 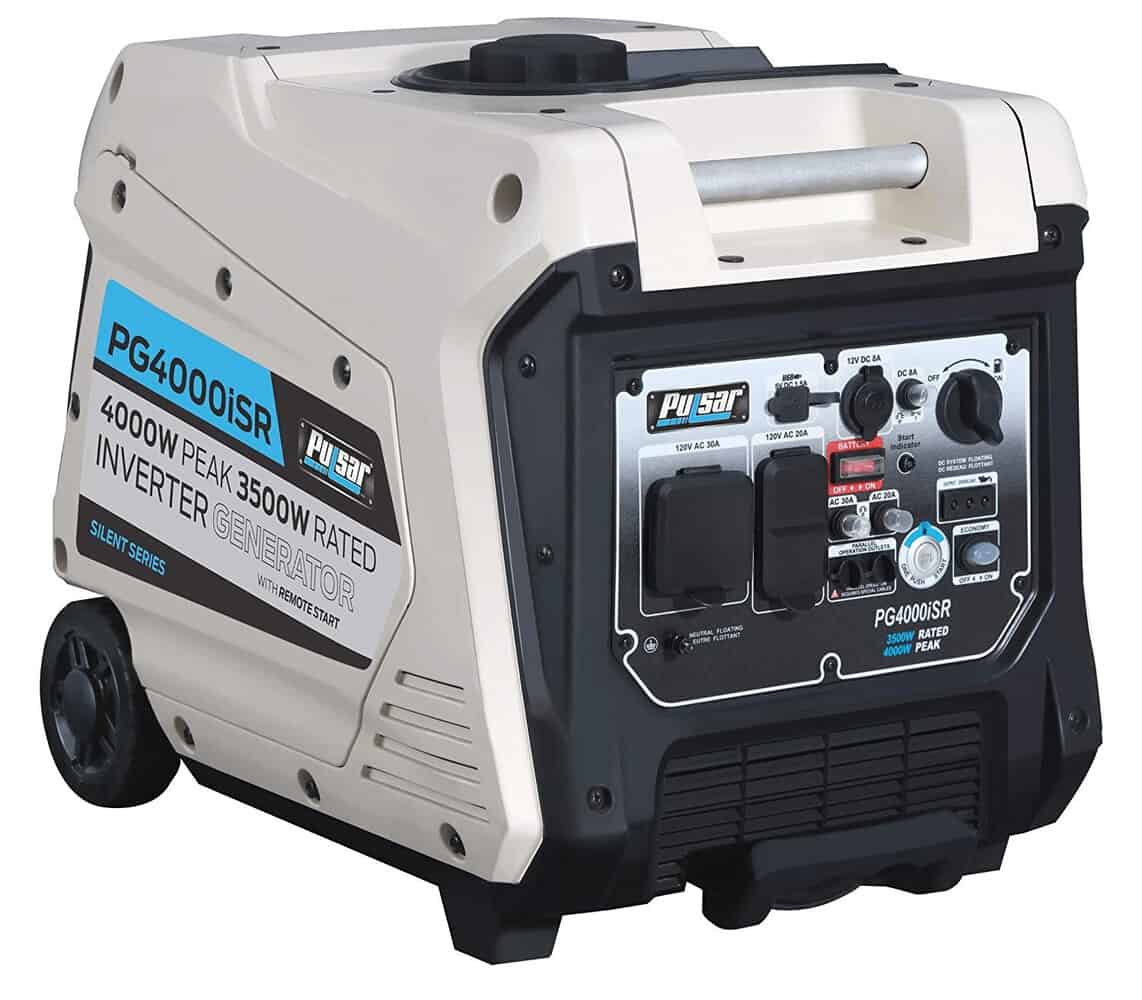 We can’t miss Pulsar PG4000iSR when talking about the best 4000-watt generators.

The Pulsar is an inverter generator with a peak wattage of 4000 watts and a running power performance of 3500 running watts. This power output coupled with its 58 dB at 23 feet makes it a worthwhile inverter for household use as well as most outdoor power needs. It also comes RV-ready too. So, if you are looking for an affordable 4000-watt inverter generator for RV, this could be it, or you can check our dedicated article about RV generators for other options.

This generator uses a 3.4-gallon tank from which it can output half its power output for up to 15 hours. In addition, it has an eco-switch that regulates its power output to the load thereby saving on fuel and minimizing noise pollution.

The key selling feature of this generator is its remote starter. This is a convenient feature that allows you to turn it ON and Off from a distance of up to 80 feet.

It also has a load of convenience features including a retractable handle, a pair of wheels, and parallel capability. 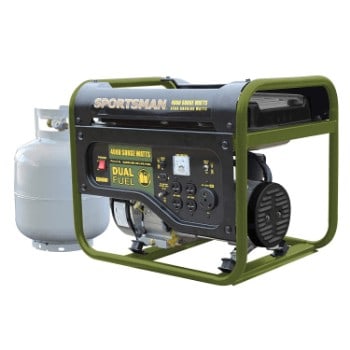 This generator’s dual fuel functionality is among a few other highlights that score it as one of the top 4000-watt portable generators to buy this year.

The ability to run it on either gasoline or propane is a life-saving feature that could make all the difference when one of these fuels is either unavailable or too expensive.

The Sportsman Gen4000DF uses an EPA-approved 212 cc OHV engine that delivers 4000 starting watts and 3500 running watts. This is a 4000-watt generator that you can rely on for your household power backup needs as well as most outdoor projects including camping, RVing (comes RV-ready), tailgating, and construction sites.

This is among the leading generators in terms of efficiency considering that it can run for up to 10 hours at 50% load on its 3.6-gal tank and up to 12 hours on a 20-pound propane tank.

It is surprisingly quiet too at less than 69 dB and relatively lightweight at 94 pounds. It does not have a wheel kit, though. So, you might want to add one.

There are 2 major things to consider when determining what you can power with a portable 4000-watt generator: its actual power output (starting watts and running watts) and the type of gadgets that you intend to power with it.

You don’t need to worry about a thing if all you want to power are things like TVs, radio and a music system, computers, mp3, etc since these draw a very low amount of power. You can actually run all of these simultaneously and still have a good amount of power left.

Electric motor powered equipment such as freezers and fridges are a different story, though. These motors are hard to start and, therefore, draw a lot of power.

The same case applies to resistive loads too; think of gadgets that produce heat including electric heaters, toasters, electric stoves, and hair dryers.

In most instances, you’ll be able to run only one or two of these gadgets provided you are careful with starting.

Generally, you can run any load on these generators as long as the wattage requirement does not exceed the generator output.

Here are some appliances you can run on a 4000-watt generator:

A 4000-watt generator makes great choices if you want a generator that packs more power than a 2kw or 3kw model, without being annoyingly cumbersome to tote around.

While it’s hard to make a clear cut on the best 4000-watt generator, the Westinghouse iGen4500 makes an incredible choice if you can afford it. This generator has the highest starting watts from all models we’ve reviewed, and also has the upper hand in terms of efficiency and low-noise operations.

In addition, its impressive portability and less than 3% THD power performance makes it possible to use it pretty much anywhere and to run any device.