DuroMax generators are common in most construction sites, homes, and camps. These generators belong to DuroMax Power Equipment- an American manufacturer based in Ontario, California.

This company’s vision is Powering Everyone, Anywhere. And true to this statement, its machines are among the most affordable on the market today. But are they of reliable quality? Well, that’s something that we’ll have to find out in this DuroMax generator review. But an important thing to note beforehand is that DuroMax designs and engineers its engines as opposed to using engines from other brands. This should give you peace of mind that the engine used on any generator is specifically designed for it.

DuroMax generators are generally inexpensive, especially if you’re not targeting its most powerful models. We could say that these generators fall within the range of what an affordable quality generator should sell at. The most affordable DuroMax generator costs around $365, while the priciest costs about $5700. If you’re looking for a good balance of affordability and output, expect to pay around $1,150.

There are a couple of things that jointly make a great generator. To mention but a few, it should start and run smoothly without being overly loud. Also, it makes sense if the generator has safety technologies to protect itself and the appliances it’s powering from damage.

Scanning through the reviews and expert feedback, you’ll realize that all of these are some of the areas that DuroMax generators shine the most. Most DuroMax generator reviews reveal that these generators start nicely almost every time. Again, DuroMax generators are known to keep the noise level at the range of 67-70 dB. Even the most powerful models don’t tend to go past the 74 dB mark, which is very impressive.

Regarding damage protection, DuroMax generators have a low oil warning LED. These generators also have an AVR (Advanced Voltage Regulation) system that monitors and ensures even power output at all times.

Finally, all portable DuroMax generators are designed around excellent ergonomics. Most of them feature heavy-duty wheels with rugged never-flat tires and a foldable handle. For those that lack the wheels, there is an option to purchase and add the wheelbase. 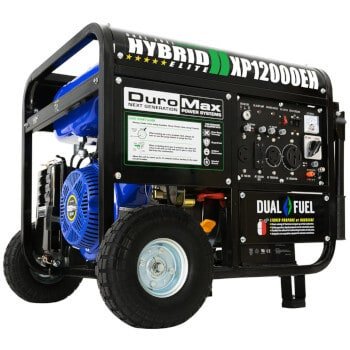 The XP12000EH is among the most powerful portable generators from this manufacturer. This is a reliable model if you’re looking for lots of power to feed a couple of power-hungry construction tools. With 12000 starting watts and 9500 running watts, the DuroMax XP12000EH will also make an excellent power source for almost any home during a power outage. 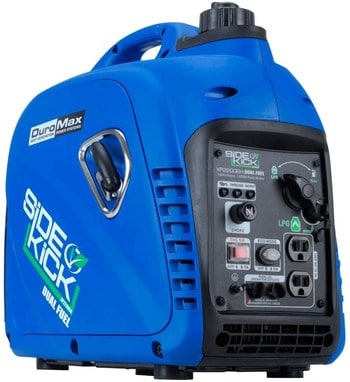 The DuroMax XP2200EH is for those looking for a compact and portable generator for use in camps, tailgating parties, and RVs. This model is powered by a 3HP 80CC engine, so it’s not surprising that it manages 2200 peak watts and 1800 running watts only. Its outstanding features include dual-fuel configuration, an RV-ready panel, MX2 technology, and parallel capability. 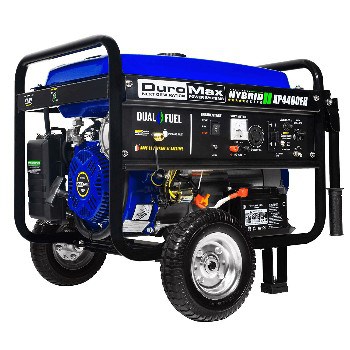 DuroMax XP4400EH outputs 4400 starting watts and 3500 running watts. This is enough power to keep a couple of your household appliances, including freezers running when the grid is down. We like that it keeps the noise down at around 69 dB. But what makes it a worthy investment is the freedom to run it on either gasoline or propane. 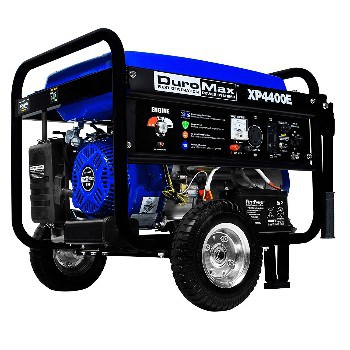 The XP4000E will make an incredible investment if you want an affordable generator with good power and minimal bells and whistles. It cranks out 4400 peak watts and 3500 running watts. Besides using it for low-power needs at home, the XP4400E will also come in handy when powering your RV. 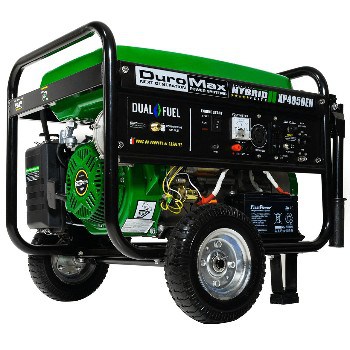 Another popular model in this manufacturer’s catalog, the DuroMax XP4850EH scores a lot of marks on reliability, safety, ease of maintenance, and overall pricing. This dual fuel generator outputs 4850 watts at peak and 3850 running watts. So, it’s a worthy pick for low to medium power loads at home and jobsites.

The DuroMax Power Equipment company was founded in 2003. Although a relatively new entrant in this business, this California-based manufacturer has among the most reputable power sources, especially when affordability and reliability top the list of must-haves. Besides generators, DuroMax also makes power tool engines, pressure washers, and pumps.

DuroMax Power Equipment also owns the Durostar brand of generators. Actually, you’ll realize that the 2 brands use a single website.

Duropower. Durostar generators are manufactured by Duropower, which is based in California too.

Where are DuroMax generators made?

China. Similar to other American generator manufacturers, DuroMax designs its engines in the US, but actual manufacturing is done in China.

Where to buy DuroMax generators?

DuroMax does not sell its generators off its main website. However, you can purchase their generators from Amazon, the Home Depot, Lowe’s, Walmart, and Toolup, among other dealers and retailers listed here.

What warranty does DuroMax offer for its generators?

3 years. DuroMax offers a 3-year limited warranty with most of its residential-use generators. For commercial use, the warranty is capped at one year.

Which is the best oil for DuroMax generators?

Conclusion: Should You Buy a DuroMax Generator?

DuroMax generators are engineered around reliability and affordability. If feedback from current users is anything to go by, you can confidently purchase a DuroMax. We appreciate this manufacturer’s efforts in offering a fully functional panel and a heavy-duty steel frame and wheelbase combo. Besides, we like that DuroMax goes the extra mile to keep the noise output relatively low across all generators.

Overall, the XP2200EH will make an incredible purchase if you want a dual-fuel inverter for outdoors use. The XP4850EH, on the other hand, will fit the bill if you want an affordable generator for household use during emergencies. Lastly, if you’re looking for a generator to supply an entire off-grid worksite with power, check out the DuroMax XP12000EH.

That’s it for this DuroMax generator review. If you’re looking for more recommendations of similarly priced generators, you may want to consider Predator, Westinghouse, and Rainier, or check our list of best generator brands.