Powerhorse generator brand doesn’t pop up a lot in most lists of the most popular generators. At least, we can’t compare it to other commonplace manufacturers, including Honda, Westinghouse, and Champion.

However, in our assessment, we imply that this brand’s unpopularity is perhaps due to a lack of aggressive marketing. Otherwise, Powerhorse generators tick almost all the boxes of top portable generators from design to reliability. If anything, these generators are often regarded as Honda clones owing to the quality of their engines.

Don’t take a word for it, though. In these Powerhorse generators review, we intend to answer all of your questions regarding this brand from its major strengths to weak points. In addition, we’ve compared its products and identified 5 of the best Powerhorse portable generators that you can buy this year.

In our experience with most people’s purchasing patterns, Powerhorse generators are in the range that buyers consider affordable. These generators fall in the same category as other popular brands like Westinghouse, Generac, and Duromax. They aren’t the cheapest nor the most expensive. The average price for a Powerhorse portable generator is around $850. The cheapest model costs around $430, while the most expensive unit comes at $3000.

Powerhorse generators offer almost every feature and function that you’d want in a good generator. Some of the high-power units offer dual-fuel functionality. Almost all of them have low-oil indicators and shutdown functions for durability.

Besides, these are generators that you can use almost anywhere. Both open-frame and inverter Powerhorse generators generate power with less than 5% T.H.D. Moreover, inverters run relatively quiet, so you can use them comfortably at home and even in parks.

As you can see from our Powerhouse portable generators reviews, these units are designed with ease of use in mind. A good number of them have a multi-functional V.F.T. LCD, oversized fuel tanks, foldable handles, and a wheel kit for easy maneuverability.

Of course, we don’t mean that all Powerhorse generators are great. Some of them just don’t cut it, but this happens with all generator brands, including Honda. 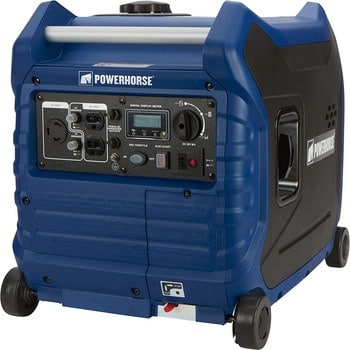 The Powerhorse LC3500i is engineered with campers in mind- and what’s good for the campers is good for RVers and tailgaters too. This model uses inverter technology, so it’s not surprising that most people rave about its quiet operations. It produces 3500 surge watts and 3000 rated watts. You can also connect two generators (2000w or 35000w) to power your heavy loads.

The Powerhorse LC3500i has an electric start (battery included), but it also offers a recoil start option. It also has an LCD digital display and low-oil shutdown. 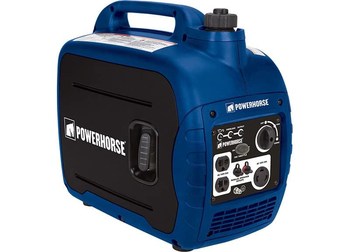 This is the smallest generator by Powerhorse, but an excellent pick if you want a portable camping generator for your regular outdoor power needs. The LC2000i weighs around 55 lbs (dry weight). Its 80cc engine produces 2000 surge watts and 1600 running watts. 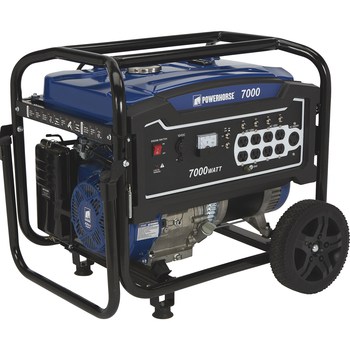 This generator offers a sweet spot on the price-wattage-portability continuum. This model is considerably affordable, yet it has so much to offer. Its 420cc generates 7000 surge watts and 5500 running watts with below 5% T.H.D. The Powerhorse 750140 carries a 6.6-gallon gas tank and has a fuel gauge. 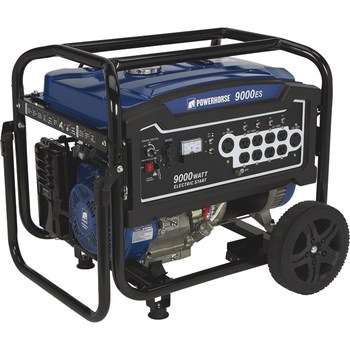 The Powerhorse 9000ES may be a perfect pick for small-to-medium size worksites. This open-frame generator is powered by a 420cc engine that produces 9000 starting watts and 7500 running watts. You can trust it to run several high power tools and keep a good number of your appliances running at home. Its outstanding features include 11 power outlets, less than 5% T.H.D. power, electric start, and rugged non-flat wheels. 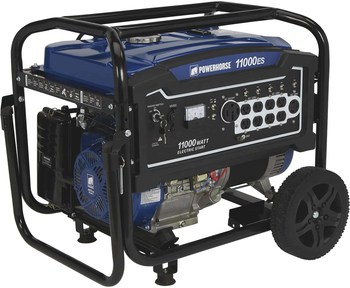 If the Powerhorse 11000ES above doesn’t cut it for you in terms of power output, this one might interest you. The Powerhorse 750144 uses a 457cc engine capable of outputting 11000 surge watts and 8400 running watts. It has a 6.6-gallon tank with fuel gauge and 11 power outlets, including eight 120v 20A ports.

In addition to generators, Northern Tool and Equipment specializes in many other products ranging from automotive to construction, electricals, and welding tools.

Powerhorse generators are made by Northern Tool and Equipment

Where are Powerhorse generators made?

Powerhorse portable generators are produced in China but their design and quality control are done in the USA.

Where to buy Powerhorse generators?

What warranty does Powerhorse generator come with?

Northern Tool offers a 2-year warranty with most Powerhorse generators.

Which is the best oil for Powerhorse generators?

Conclusion: Should You Buy a Powerhorse Generator?

As a conclusion to these Powerhorse generator reviews, we can say that Powerhorse may not be as popular as other brands but it’s certainly worth considering if you want a good balance of affordability and quality. This brand has everything for everyone, from a small, quiet, and easily portable inverter for light loads to 10,000+ watts generators for construction tools.

If you are looking for the best Powerhorse generator then why not check LC3500i. It’s quiet and has enough power to run most of your houshold appliances. In case, you want a powerful generator then Powerhorse 7000 Watt model might be a perfect pick.

For alternatives to Powerhorse, check this list of best generator brands, or read our Duromax generators reviews or Briggs and Stratton generator review.

Icons made by Freepik from www.flaticon.com