Predator generators are famous for their Honda-clone engines. And true to Harbor Freight’s tagline- Quality Tools, Lowest Prices– these generators are giving most of the popular brands a run for their money in performance and affordability.

This manufacturer recently added inverter generators to its catalogue. And this means that there’s a Predator generator for pretty much any of your powering needs at home and outdoors.

We’ve also identified a couple of the best Predator generators that you might be interested in this year. Let’s get started.

Compared to other generator brands, our review team classifies Predator generators as cheap. The price of Predator generators starts at around $350, and the most expensive model will cost you about $800 (on the manufacturer’s website). The average price is slightly above $500 at the time of writing.

Predator generators are reasonably well built. These generators use Honda-clone engines. And what’s so impressive is that you can actually interchange some parts between these 2 brands down the road. Although Predator generator engines aren’t a match to their Honda alternatives, they are among the best in their price range, that’s for sure.

Regardless of your budget, you’ll be getting a great deal of a generator in terms of power output, reliability, and fuel economy. These engines don’t come in dual-fuel capability (at least for now). Luckily, you can easily add it using a third-party conversion kit if this versatility matters to you.

Predator generators have a quite basic control panel that seems replicated across all similar models. However, with most of the open-flame generators, you’re assured of an electric start, up to 5 power outlets, and a low-oil indicator and shutdown. These are perhaps the most critical features to have on a generator.

Switching gear to portability, most Predator generators are similar to any other typical generator weight-wise. The weight tends to get higher with an increase in engine size and wattage, but most of them have handles and a wheel kit to boost maneuverability. On this note, you can get most of these generators with or without the wheel base. 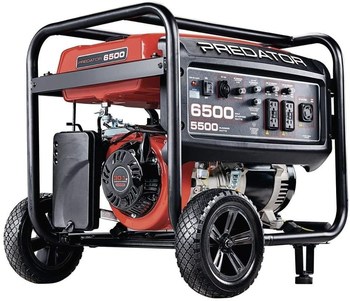 This Predator generator is engineered for high power needs even in the remotest areas. Its 420cc engine has a peak wattage of 6500 watts and 5500 rated watts and can power multiple power-hungry construction tools simultaneously. It’s perfect for keeping most household appliances humming during an outage too. This beast has a total of 6 power outlets and a large gas tank with runtimes of 10-14 hours at 50% capacity. 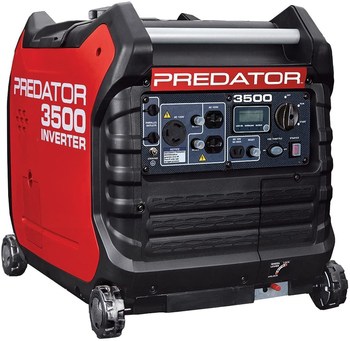 This inverter technology generator is another all-rounder. The Predator 3500w generator is super quiet and can power a 15000 BTU RV AC. It also makes a perfect generator for camping, tailgating, and home use. You can also rely on it to power several power tools at a construction site. This model offers a runtime of up to 11 hours at quarter load and has an electric start for quick starts. 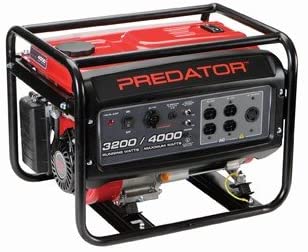 This model is among the best Predator generators dedicated for household and outdoor usage. The generator produces 4000 watts at peak and 3200 running watts. It uses a 212 cc engine that manages a runtime of up to 10 hours at 50% capacity. 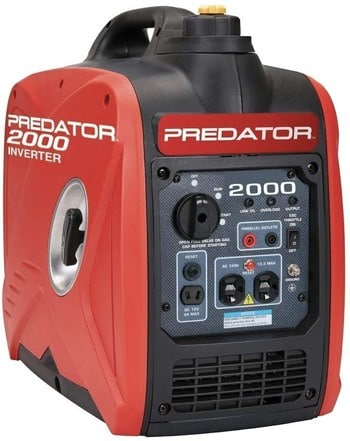 RVers, campers, and tailgaters looking for a compact but reliable portable generator are going to appreciate the Predator 62523. This model uses a 79.7cc air-cooled engine and produces 2000 starting watts and 1600 running watts. If you want more power, there’s an option to parallel this unit with another one for double power output. The Predator 62523 has a runtime of 12 hours at quarter load and a noise level rating of 65 dB. 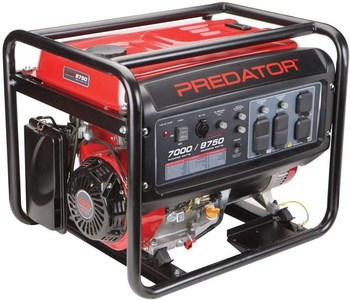 This is among the most potent Predator generators judging from its 8750 peak wattage and 7000 rated output. To complement is 420cc engine, the Predator 8750w has a huge tank capable of offering runtimes of 8-12 hours. It also has multiple outlets to suit different needs. You’ll get four 3-prong 120v duplex outlets, one 4-prong 120v/240v twist lock port, one 3-prong 120v twist lock, and a 12v DC outlet.

Predator is one of the brands owned by Harbor Freight- a privately held American company that owns several other brands. Harbor Freight was founded in 1977 by Eric Smidt. It’s currently headquartered in Calabasas, California, where they test their products for quality assurance. This manufacturer recently opened another retail store in Louisville, Kentucky bringing the number to 1000 stores scattered in all 48 US states.

Where are Predator generators made?

China. Predator generators are made and assembled in China, like most other portable generator brands. However, quality assurance is done in the company’s headquarters in the USA.

Where to buy Predator generators?

You can buy Predator generators from the Harbor Freight store near you or from their website. Most online retailers also carry this brand, including Amazon, eBay, and Sears.

What warranty does Predator offer for its generators?

2 years. Predator generators come with a 90-day manufacturer-defects guarantee and a 2-year warranty.

Which is the best oil for Predator generators?

SAE 10W-30.Most Predator generators use SAE 10W-30 unless stated otherwise in the manual.

Conclusion: Should You Buy a Predator Generator?

Predator is among the best brands in the portable generator arena. These generators are often compared to Honda since, well, their engines are Honda clones, and they are actually made by the same company. The major difference is that Predator eliminates most of the middlemen, so you get the generator at a fraction of what Honda costs.

Besides the low price tag, Harbor Freight has over 1000 stores in all the 48 contiguous states of America. The chances are that there’s one near you. So, replacement parts won’t be an issue- and they are often very affordable.

If you still haven’t picked your model, we would recommend the 6500W model and the 3500W inverter model as the best Predator generators based on our reviews. Both generators would do a great job as a backup power solution but one is more powerful and the other less noisy.