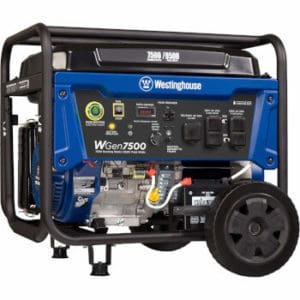 The Westinghouse WGen 7500 is the latest entrant in this manufacturer’s series of WGen generators. This open-frame style generator is currently the most powerful model in its category as its 9500 starting watts and 7500 running watts depict, and might make a great choice as an emergency power backup for almost any home, RV, and most job sites.

In this Westinghouse WGen 7500 generator review, we’ll be evaluating how this portable generator performs in terms of power output, performance, and dependability among other indicators of a high-quality generator.

The WGen 7500 generator is among the latest offerings of Westpro Power Systems that was recently acquired by Midwest Equipment (MWE).

The third most powerful generator in Westpro’s WGen Series after the 12000 and 9500, this generator offers a considerably higher wattage for a generator at its price and, therefore, promises more dependability whether used as an emergency power backup solution at home, in small commercial establishments, and anywhere else that portable lightweight electricity is needed.

This generator is a ‘gasoline-only version’ of the WGen 7500DF that runs on both gasoline and propane but which comes at a slightly higher price for this versatility.

It is also a big brother to the WGen 5500 and WGen 6000 generators- two other smaller models that are marketed to homeowners and do-it-yourselfers who want more power than you’d get from competitor generators at the price that these 2 come at.

What’s in the package?

When you purchase this generator, the package will ship with everything that you need to start powering your appliances right out of the box;

Who should buy the Westinghouse WGen 7500?

While there aren’t any limitations on who should buy this generator, it is overkill for use in certain applications including camping, boating, and tailgating. These activities are best served by generators in the regions of 2000-3000 running watts. Oftentimes, such generators are quieter and also offer excellent mobility- just what you need when camping! Check our Westinghouse generators review for other good models of the brand. 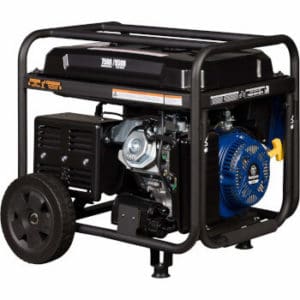 Considering this generator’s 9500 starting watts and 7500 running watts, there’s no doubting that it will be able to power up most of the appliances common in an average home (think of refrigerators, freezers, furnace, sump pump, AC, fans, lighting, and oven etcetera).

It also packs enough power for most job site applications and it actually has enough oomph to let your crew run several power tools together.

An impressive feature here is that the WGen 7500 comes transfer switch ready. This means that with a 10-circuit transfer switch and professional installation, this generator can keep all your appliances powered without the need for lengthy extension cords.

The WGen 7500 has an amazingly long running time for a generator with its power output capabilities. The fact that it can run continuously for around 16 hours at 50% load and at least 18 hours at 25% load means that if you live in areas that are often hit by outages that last 2-3 hours, just a single tank can take you for over a week assuming that your wattage needs don’t exceed 3,750 watts.

This generator’s high surge watts offer you a greater leeway to add more appliances to the current load without it tripping the current.

Similar to other top-rated portable generators, the WGen 7500 maintains a minimum of 3600 rpm that is required to produce 60 Hz. In addition, as it’s the norm with Westinghouse generators, this one has an automatic voltage regulator that ensures reliable and precise power output throughout its voltage output. So, when you connect an additional appliance, you’ll hear the engine rev up to produce a consistent power output while maintaining its speed engine.

Worth noting, this generator has a Total Harmonic Distortion (THD) of 9%. This means that it’s not so safe for your sensitive electrical equipment such as medical devices, TVs, and stereos that require less than 5% THD of the sine wave AC. This is usually the case with most non-inverter generators but you can go around it by adding an uninterrupted power supply (UPS) device to the rig. 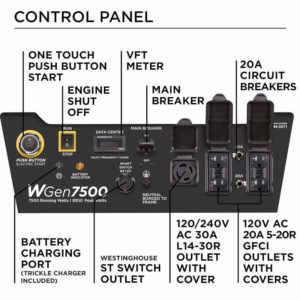 At a glance, Westinghouse generators look sophisticated and advanced than most other generators at the same price tag- and they sure are!

The good news, however, is that they are also designed with relative ease of use too. A standout highlight here is the remote key start fob which allows you to start and shut down the engine from a distance.

You could also use a push-button start on the control panel. And what you’ll like here is that this generator comes with an onboard battery and charger to keep it powered. There’s also a recoil start in case the battery is down and won’t start the generator, though.

All these outlets have overload breakers for safety as well as plastic covers that protect them from dust and moisture.

This generator has a superbly comprehensive control panel with an incredible digital display that Westinghouse calls the VFT data center that provides you with all the vital information regarding the performance of the generator including runtime, voltage, and frequency.

You’ll also find a 2-pole circuit breaker with the sole purpose of protecting your generator from overload.

The WGen 7500 does not have a low-oil light indicator- something that we’d really want to see for such a powerful generator. But it has a low-oil shutdown switch that protects it from self-damage and won’t let the engine start until the oil is topped up to the proper level. So, if you are keen on checking the oil level, this won’t be an issue.

The Westinghouse WGen generator does not require a lot of maintenance also in that its 4-cycle OHV engine has cast iron cylinder sleeves to give it long life and durability.

Well, while this generator is marketed as a portable model, its 200-pound weight means that you won’t want to lug it around every now and then. Its large wheels and foldaway handle, however, make it very easy to move around the job site.

It’s also not so loud at 64 dBA which is a far cry from the 70+ decibels that most generators in this power range tend to output.

Most generators within this power range tend to cost way below the 1-grand mark, and the Westinghouse WGen 7500 isn’t any different. However, it is still much cheaper compared to its closest competitor, the Champion.

Compared to the competition in terms of runtime, this generator is much more fuel efficient. This coupled with its low maintenance requirements means that it will also be saving you quite a good amount of money down the road.

What do previous buyers say about the Westinghouse WGen 7500?

I did scour the internet to get a glimpse of what other previous buyers think, and just as you’d expect from such a powerful generator, the feedback is rather positive. Going through the reviews, one thing that stands out is its easy start and ease of use. Lots of people also appreciate its enormous power output affirming that it is not bogged down by loads with a high surge.

Most of the negative reports have to do with improper handling during shipping. Thus, you might want to be a little bit quick in unpacking the generator before signing the papers and letting the delivery guys leave.

Other generators from Westinghouse WGen Series

The WGen 7500 is one of the generators that MWE added to its WGen series. Here is a list of the other models in this line:

If you’d like a little bit more power than what the WGen 7500 offers without going over the 1-grand mark, then Duromax XP12000E might interest you. This one has a peak surge of 12000 watts and 9000 running watts enough for a mansion and a residential construction site. It also has an enormous fuel tank (8.3 gallons) and offers a run time of 10 hours at 50% load.

Another good alternative to Wgen7500 is the Powerhouse portable generator. It provides 7250 running watts and falls within the same price bracket. Furthermore, this generator has less than 5% THD which makes it perfectly safe for sensitive electronics.

The Westinghouse WGen 7500 is currently one of the most dependable generators from this manufacturer. It also leads other similar models in its price range in terms of power output, ease of use, convenience, and fuel efficiency.

Of course, it’s not perfect, but weighing its strengths and drawbacks, it is a really great purchase for anyone looking for a tough, powerful, and rugged generator with enough juice to power up a job site or an entire home during outages. Its 3-year warranty is just a confirmation of its high level of quality. 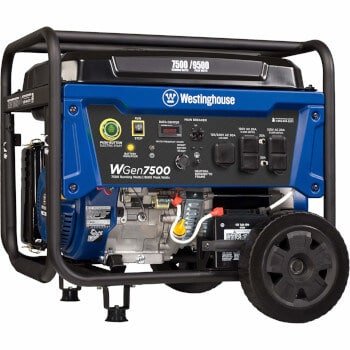